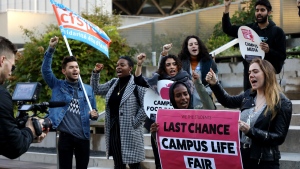 Students protest outside court before a hearing in Toronto on Friday, Oct. 11, 2019. The students are challenging the Ontario government's 'student choice initiative', which makes certain supplementary fees optional. THE CANADIAN PRESS/Colin Perkel

TORONTO - The Ontario government's order that made certain student fees optional was a politically motivated attack on student unions and services that threatens university independence, Divisional Court heard on Friday.

In his submissions, a lawyer for the students said the Progressive Conservative government under Premier Doug Ford had no authority to implement its “Student Choice Initiative.”

The change was arbitrary, court heard, and threatens student-led programs such as clubs, campus newspapers, food banks and other support services, and part-time jobs.

“The autonomy of universities is threatened,” lawyer Mark Wright told the three-judge panel.

The government maintains students should have more choice as to which campus services they support. It also says the directive enhances transparency.

But Wright said the order was made for an “improper purpose and in bad faith.”

From the outset, the lawyer said, the minister targeted student associations. The list of what government considers essential fees students have to pay is arbitrary and was drafted without consultation, Wright said.

He cited comments Ford made in February as evidence of bad faith.

“Students were forced into unions and forced to pay for those unions,” Ford said in a fundraising email at the time. “I think we all know what kind of crazy Marxist nonsense student unions get up to.”

Full-time students in Ontario pay about $300 in fees each year, none of which goes to the institutions themselves. While student organizations say it's too early to tally the impact, York University estimates 60 per cent of such fees - about $1.25 million - are now optional.

The government has threatened to claw back operating grants to schools that don't abide by its directives.

Wright said that condition violates legislation barring ministerial interference in the independence of universities, and “normal activities” of elected student bodies should also be off-limits.

“If they can intrude on the existence of a student government to function on campus, why can't they intrude on tenure or anything else?” Century said.

“The Ford Conservatives are attacking the students' right to unionize, to organize and to provide services,” Glover said. “There's a vast reduction of services, and some of these are actually vital to student life.”

In support of the government, a lawyer for the Jewish human-rights group B'Nai Brith Canada said the “measured” initiative takes into account students who disagree with their elected associations.

Corbett was skeptical, asking why people would pay taxes if they didn't agree with the government.

The justice gave the government's lawyers a rough ride, pummelling them with questions about the rationale for a change they struggled to explain.

“There's no principled explanation other than, 'Cabinet said so,”' Corbett said at one point.

The justice also questioned whether Ontario was being candid about what prompted the measures.

Kayla Weiler, with the Canadian Federation of Students, said all students benefit from their union activity.

“Students are often targeted for major cuts,” she said. “Even if you're a student that's never set foot on campus, you benefit from the advocacy.”

The panel reserved its decision.