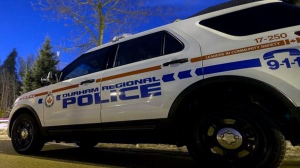 A female driver was rushed to a Toronto trauma centre following an early morning motor vehicle collision in Ajax.

The crash happened around 5 a.m. on Westney Road, between Bayly and Fairall streets.

According to Durham Regional Police, the victim sustained serious, but not-life-threatening injuries.

Durham police said the southbound lanes of Westney would remain off limits for the day while crews replace a damaged hydro pole.