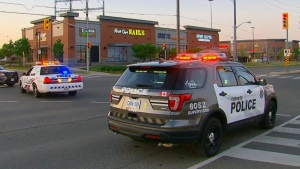 A female pedestrian is suffering from serious injuries after she was struck by a vehicle in Etobicoke on Sunday evening.

Emergency crews were called to the area of North Queen Street and Nova Road at around 7 p.m.

Toronto police said they arrived on scene to find a female victim trapped underneath a vehicle. Officials were able to get her out from under the vehicle before transporting her to hospital via emergency run.

She is considered to be in stable condition, according to Toronto paramedics.

No further details regarding the vehicle involved in the collision has been released by officers.

Roads have been blocked off in the surrounding area as an investigation into the incident is conducted.