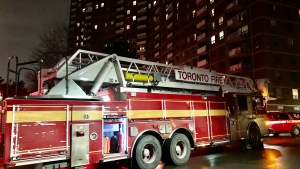 Crews were on the scene of a two-alarm fire at a residential building in Etobicoke. (Michael Nguyen/ CP24)

One female has been rushed to hospital with serious injuries following a fire at an Etobicoke highrise late Sunday night.

The fire broke out shortly before midnight on the 17th floor of a Toronto Community Housing building on Capri Road, near The East Mall and Rathburn Road.

The small fire was nearly out when crews arrived on scene, officials said.

Toronto Fire Services confirmed to CP24 that crews were met in the lobby of the building by a female who had suffered burns to her face.

She was taken to a Toronto trauma centre for treatment.

The cause of the fire is still under investigation.