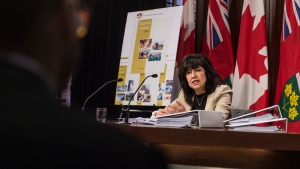 TORONTO - As many as 10,000 unsafe commercial vehicles have been allowed to operate on Ontario's roads because of a drop in the number of government inspections, the province's auditor general said this week in her annual report.

Bonnie Lysyk said 89,000 commercial trucks and buses were inspected last year, down from 113,000 in 2014. She called the 22 per cent decrease is a “missed opportunity” to prevent injuries and improve road safety.

In the 10 years from 2008 to 2017, commercial vehicles were involved in more than 182,000 collisions that resulted in 1,180 fatalities, Lysyk noted in her report made public Wednesday.

“Ontario has had higher fatality and injury rates for commercial vehicles than Canada as a whole and the United States in most years between 2008 and 2017,” she said in a statement.

The province had over 290,000 registered commercial vehicles operating in 2018, and truck traffic has increased by 10 per cent over the last decade.

Lysyk said collisions involving those vehicles expose people to a higher risk of injury or death because of their size.

She pegs the “direct social cost” of truck collisions in Ontario between 2011 and 2015 at $2 billion, including things like property damage, health care and emergency services.

Her audit also found that the province's Transportation Ministry had not inspected any vehicles belonging to over half of the province's 60,000 commercial carriers, including some it said were at the “highest risk of future collision.”

“We analyzed the carriers with the highest collision violation rates and found that nearly 20 per cent ... had not had any of their commercial vehicles inspected in the two years preceding May 2019,” the auditor's report said.

A spokeswoman for the Ministry of Transportation said the government accepts the auditor's recommendations and will be introducing a plan to improve commercial carrier safety in the coming months.

“Our plans focus on high-risk drivers and carriers while improving how government programs serve our trucking industry,” Kristine Bunker said in a statement.

She added that the ministry is also reviewing performance expectations for its officers and plans to hire additional recruits next year.

Transportation Minister Caroline Mulroney has said the decreased number of inspections is due to an inability to fill enforcement officer vacancies.

The government has also said most of the current officers do not meet their annual inspection targets, further compounding the problem.

The president of the Ontario Safety League lauded the auditor general for her report, saying it spells out the inaction on the file by the previous Liberal government.

Brian Patterson said the province has been afraid of upsetting some stakeholders in the trucking industry, and as a result has failed to bolster inspection work.

“To hell with whether people who want to complain that it's affecting their business,” he said of the inspections. “We wouldn't allow a meat packer to put unsafe products on the market.... Why do we feel there is a sensitivity to tell truck drivers and organizations that they have to step up?”

A spokeswoman for the Canadian Automobile Association said the issue comes down to education and enforcement.

“A back-to-basics approach can help to align industry and government and ensure that things like enforcement are prioritized,” Teresa Di Felice said in a statement.

“Commercial trucking, in particular, is broader than Ontario boundaries, so there needs to be consistency of rules and application of those rules, to create compliance in an industry that operates across borders.”

“The inspectors are very competent, very well-trained - it's just there aren't enough of them to handle the workload,” he said.

Vanthof said the government should also invest in mobile scales to address another issue raised by the auditor's team - trucks driving on municipal or urban roads to avoid highway inspection stations.

“The government needs to take this seriously,” Vanthof said.