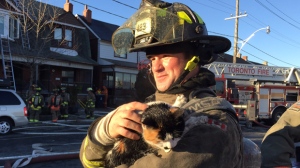 Fire crews rescued a cat and her kittens from a three-alarm fire at a home in Christie Pits Sunday morning. (Arda Zakarian/ CP24)

Two firefighters and six civilians were injured following a three-alarm fire at a home in Toronto’s Christie Pits neighbourhood early this morning.

The fire broke out shortly after 6 a.m. at a semi-detached home at 703 Dupont Street, near Christie Street.

A caller told emergency personnel that flames could be seen coming from the back of the house and when crews arrived on scene, one side of the home was fully engulfed in flames.

The fire was initially reported as a two-alarm blaze but was later upgraded to a three-alarm.

“When the first crews arrived, they encountered very heavy smoke and flames in unit 703. It was already spreading upon the arrival of our crews,” Toronto Fire Chief Matthew Pegg told CP24 at the scene.

The fire spread to three neighbouring homes and the occupants of all four houses got out safely.

“Upon the arrival of our crews, everyone made it out of the home on their own,” Pegg said.

A firefighter who fell off of a roof while attacking the blaze has been taken to hospital for treatment.

“The reports are that he was conscious and speaking to other crewmates,” Toronto Fire Platoon Chief Colin Giffin said earlier Sunday morning.

His fall was broken by another firefighter, who was also taken to hospital to be treated.

Three civilians were taken to hospital to be treated for smoke inhalation, while 3 others were assessed by paramedics at the scene, Toronto Fire confirmed.

Fire crews managed to rescue a cat and her kittens from the blaze.

The cause of the fire is not yet known.

“They are just gathering some preliminary information. I suspect given the number of patients that we’ve had here today, we will be in contact with our colleagues at the Office of the Fire Marshal and the investigation will go forward from there.”

A TTC bus was brought in to shelter those evacuated as a result of the fire and displaced residents can also seek shelter at a nearby coffee shop, Pegg said.