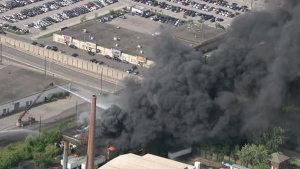 Crews are battling a fire at a business in Mississauga. (CP24)

Service on the GO Milton line has been suspended as firefighters continue to battle a large blaze at a Mississauga commercial property, which is near the train tracks.

Peel police said the fire is on Tonolli Road, near Dixie Road and Dundas Street East.

Thick black smoke was seen billowing out of a building as crews tried to contain the fire.

Mississauga fire is asking residents in the area to keep windows and doors closed.

Patten told CP24 around 5:30 p.m. that the fire is "somewhat under control" with the smoke appears to be subsiding.

No injuries have been reported. The cause of the fire is unknown.

Patten said road closures will be in effect until further notice.

Anne Marie Aikins of Metrolinx said in a tweet that the firefighters need to access the corridor on the Milton line to battle the fire safely.

The agency said several trains have been cancelled on the Milton line due to the fire.

Trains are also holding at Dixie GO station due to the fire.