Firefighter charged after girl, 11, hit by fire truck in Wychwood 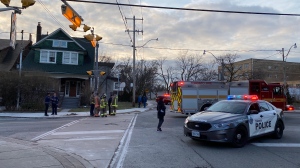 Emergency crews are pictured at the scene where a girl was struck by a Toronto Fire service vehicle Monday December 16, 2019. (Peter Muscat)

A Toronto firefighter is facing charges after an 11-year-old girl was struck by a fire truck in Wychwood last month.

Police say members of Toronto Fire Services were responding to an emergency call on Dec. 16 at around 3:30 p.m. when the collision occurred.

According to investigators, the fire truck was heading north on Oakwood Avenue, near Rosemount Avenue, with its lights and sirens activated when the driver struck an 11-year-old girl who was crossing at a crosswalk.

The girl was hit by the front of the truck and first aid was immediately rendered to the child by firefighters, police say.

She was taken to hospital for treatment and while her injuries were not life-threatening, she is still recovering in hospital.

The operator of the fire truck was subsequently charged under the Highway Traffic Act with careless driving causing bodily harm and passing a stopped vehicle at a crossover.

The firefighter is scheduled to appear in court at Old City Hall on Feb. 20 at 1:30 p.m.

"My thoughts, and the thoughts of the entire Toronto Fire Services team, are with the young girl and her family during this difficult time. Each of us sincerely hopes for a full and speedy recovery," Pegg said.

Pegg said the firefighter charged in the incident is "highly trained and experienced" and has worked for Toronto Fire Services for more than 22 years.

Emergency crews are pictured at the scene where a girl was struck by a Toronto Fire service vehicle Monday December 16, 2019. (Peter Muscat)