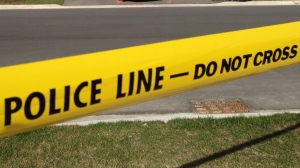 A firefighter has been taken to hospital with unknown injuries following a blaze at a low-rise apartment building in Port Credit.

The fire broke out inside a unit in a building on Lakeshore Road West at Pine Avenue at around noon.

Firefighters were able to contain the fire to the originating unit, though three other neighbouring units sustained smoke and water damage.

At this point it is unclear when the residents displaced by the fire will be able to return home.

In a news release issued on Thursday afternoon, the City of Mississauga said that a command post has been set up on site to help displaced residents connect directly with various agencies, including the Red Cross, with regards to “needs they may have with respect to shelter, food, medication, clothing, hygiene items and more.”

The city says that a MiWay transit bus is also on hand to provide temporary shelter to those displaced by the fire.

"Thank you to the swift actions of our Mississauga Fire and Emergency Services team and our supporting partner agencies. I am very relieved there are no reported injuries from the fire today in Port Credit," Mayor Bonnie Crombie said in the release. "My thoughts are with the firefighter who was taken to the hospital. I am grateful for the work our first responders do to protect our community."

Lakeshore Road West is currently closed in both directions between Pine Street South and Maple Avenue South as crews continue to clean up at the scene.

The cause of the fire remains unknown.