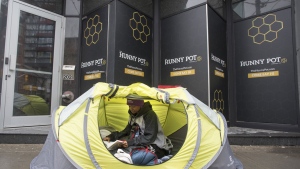 Marie Kamara becomes the first in line, on Sunday March 31 , 2019, as she sits in her tent, outside the Hunny Pot Cannabis retail store, on Toronto's Queen Street which opens tomorrow morning. April 1 marks the first day that retailers who were successful in Ontario's lottery can open brick-and-mortar cannabis retail stores. THE CANADIAN PRESS/Chris Young

The first legal pot shop in Toronto is ready to open its doors Monday morning.

Speaking inside the four-level retail store located at 202 Queen Street West, the communications officer for The Hunny Pot Cannabis Co. told CP24 that their team is “really excited for people to see the space.”

“Our focus from the very beginning was to open on April 1 at 9 a.m. and we never wavered from that,” Cameron Brown said. “We knew that we wanted to be open to make that first sale and the fact that we are the first Toronto retailer to be open and to make that first sale in the biggest market in Canada, I can’t express how excited we are about that.”

Although the process to set up shop was very quick, Brown said their 50-person team is ready to serve.

“We have a ton of education with the budtenders on the product side but also the story behind every little piece that we put into here so we are really excited for the customers to see it,” he said. “We went very heavy on staff because it’s very important that people coming through the door get the full Hunny Pot experience. They’ve (the staff) have been in training all week on the products, training on the process and making sure that we have everything down to be able to flow if we have two people here tomorrow or 10,000 people.”

The Hunny Pot Cannabis Co. is one of ten legal pot shops in the province expected to open Monday morning after being granted a retail licence from the Alcohol and Gaming Commission of Ontario (AGCO) earlier this month.

On Monday, three shops are expected to open in Ottawa, two in Kingston and one in Brampton, St. Catharines, London and Burlington respectively, according to the AGCO.

“Although the AGCO has authorized these stores to open on April 1, the operators will determine their own opening day and operating hours as permitted in the regulation,” the AGCO said on its website on Sunday.

The retail cannabis licences were granted after the provincial government announced the first 25 companies that were able to apply for a licence on Jan. 11. More than 17,000 expressions of interest to receive a licence were accepted prior to the decisions, according to the AGCO.

The licences were divided by region, with five in the east of the province, seven in the west, two in the north, six in the Greater Toronto Area and five in Toronto.

Those who were granted a licence but neglect to open on time can face a fine from the provincial government.

A lineup was started by cannabis lawyer Caryma Sa’d and her assistant Marie Kamara outside of The Hunny Pot Cannabis Co. on Sunday afternoon.

“It’s a historic moment,” she said.

Sa’d said the process set up by the provincial government regarding the opening of legal cannabis shops in Ontario has been “disappointing.”

“It is disappointing but perhaps not surprising given how the government decided to roll out. Initially we had thoughts of privatization, open for business and that was replaced with a lottery that had zero merit criteria so it’s not surprising that only a handful of stores in the province were able to be ready on time.”

Recreational marijuana has been available to Ontarians legally through online purchase on the Ontario Cannabis Store website since October 17.

Marie Kamara becomes the first in line, on Sunday March 31 , 2019, as she sits in her tent, outside the Hunny Pot Cannabis retail store, on Toronto's Queen Street which opens tomorrow morning. April 1 marks the first day that retailers who were successful in Ontario's lottery can open brick-and-mortar cannabis retail stores. THE CANADIAN PRESS/Chris Young