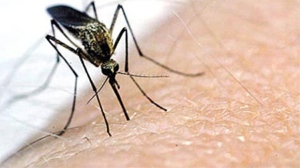 A mosquito is shown in a file image.

Mississauga, Brampton, and Caledon residents are being reminded to protect themselves from mosquito bites and remove any standing water from their property after the first West Nile virus-positive mosquitoes of the year were confirmed in Peel Region.

The infected insects were recently collected from three traps in Brampton, near the intersections of Chinguacousy Road and Williams Parkway, Hurontario Street and Steeles Avenue, and The Gore Road and Cottrelle Boulevard.

The health unit also surveys public areas for stagnant water that could serve as breeding sites for mosquitoes. Identified locations are treated with larvicide, they said in an Aug. 9 news release.

So far this year, there are no confirmed human cases of the mosquito-borne illness, which is passed to humans through the bite of an infected mosquito, in the Region of Peel.

While the risk of acquiring the virus is low, the Region of Peel is urging people to protect themselves against mosquito bites by applying a Health Canada approved insect repellent containing an ingredient effective against mosquitoes, like as DEET or icaridin, to exposed skin and clothing.

Residents should also ensure all windows and door screens fit securely and are free of tears and holes.

Further, people can help prevent mosquito bites by removing stagnant water or draining items on their property. Water stagnant for more than seven days is an ideal breeding site for mosquitoes, the region noted.

A mosquito is shown in a file image.