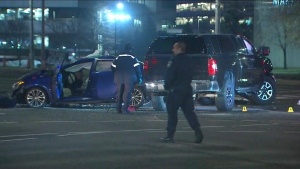 Police respond to a collision at Mississauga Road and Meadowvale Boulevard in Mississauga Tuesday November 19, 2019.

Five people were taken to hospital, two of them in critical condition, following a collision in Mississauga Tuesday evening.

It happened at the intersection of Mississauga Road and Meadowvale Boulevard.

Peel police initially said two people from one of the vehicles were taken to hospital with serious injuries.

All five people  - three women and two men – were later listed as being in stable condition,  police said.

Images from the scene showed a small blue sedan with extensive damage alongside a black SUV.

The intersection has been shut down as police investigate.