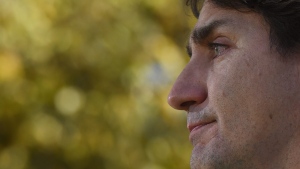 OTTAWA -- The newly unearthed images of Justin Trudeau wearing brownface and blackface that have rocked the federal election campaign comprise only the latest example of private-life revelations, gaffes or missteps that have undermined the Liberal leader's carefully cultivated image as a standard-bearer for inclusiveness and tolerance. Here are some others:

'THANK YOU FOR YOUR DONATION' -- At a $1,500-a-ticket Liberal fundraiser this past March, a protester interrupted Trudeau's remarks to demand the Liberal government make good on its promise for a mercury treatment centre for Grassy Narrows First Nation. "Thank you for your donation," Trudeau told the protester as security escorted the banner-toting woman from the room. "I really appreciate your donation to the Liberal Party of Canada." The comments were captured on video and posted to social media.

"From time to time, I'm in situations where people are expressing concerns or protesting a particular thing, and I always try to be respectful and always try to engage with them in a positive way," Trudeau said after the video surfaced. "That's how I believe democracy should function, and I didn't do that last night. Last night I lacked respect towards them and I apologize for that."

'WHIP OUT OUR CF-18s' AND OTHER VERBAL GAFFES -- In 2014, Trudeau said the Conservative government should have been talking about providing humanitarian aid to Iraq and the fight against the so-called Islamic State, "rather than trying to whip out our CF-18s and show them how big they are." In 2013, he told a Toronto fundraiser for women that he had a "level of admiration" for China's "basic dictatorship" because it allowed the country to "turn their economy around on a dime" and go green. And during a November 2018 Q and A with post-secondary students in Singapore, he responded -- jokingly -- to a compliment about his looks this way: "It's the Singaporean blood," he said -- a reference to his East Asian ancestry. "It gives me high cheekbones, and I tan dark."

THE 'KOKANEE GROPE' -- An unsigned editorial from a 2000 edition of the Creston Valley Advance surfaced on social media, alleging that Trudeau "inappropriately handled" a reporter covering an event. Trudeau, then 28, reportedly apologized to her, saying, "If I had known you were reporting for a national paper, I never would have been so forward." He apologized, but said he didn't think his actions were "in any way untoward," saying women can experience an interaction differently than men and that "we have to respect that and reflect on that."

"I've been reflecting very carefully on what I remember from that incident almost 20 years ago and again I feel -- I am confident -- that I did not act inappropriately," he said. "But part of this awakening that we're having as a society, a long-awaited realization, is that it's not just one side of the story that matters."

AFGHAN VETERANS -- At a town hall event in February 2018, Trudeau was confronted by retired corporal Brock Blaszczyk, who lost his left leg in Afghanistan in 2009, and wanted to know why the government was in a legal fight with a group of veterans demanding pension reforms. "Because they're asking for more than we are able to give right now," Trudeau said, prompting boos from some in the audience. He defended the government's compensation system, which includes money for rehabilitation, job-training and caregiver support, adding there was no going back to the "amount of money that was given before without accounting for the money invested in services for veterans."

ELBOWGATE -- In May 2016, New Democrat MPs were milling about on the floor of the House of Commons before a vote on a motion to limit debate on the government's controversial assisted-dying legislation, impeding Conservative whip Gord Brown from getting to his seat to start the vote. An impatient-looking Trudeau waded into the group to pull Brown through the crowd, elbowing NDP MP Ruth Ellen Brousseau in the chest in the process.

Opposition MPs howled. Trudeau apologized, calling his actions unacceptable. "I apologize for that unreservedly and I look for opportunities to make amends."