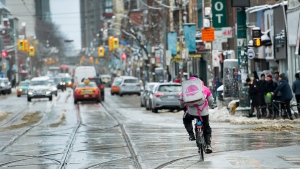 A Foodora courier picks up an order for delivery from a restaurant in Toronto, Thursday, Feb. 27, 2020. THE CANADIAN PRESS/Nathan Denette

BERLIN - Foodora says it is making plans to cease operations in Canada on May 11.

The Berlin-based food delivery app says it has not been able to reach a level of profitability in Canada that's sustainable enough to continue operations.

Foodora says it was unable to get to a position that would allow it to continue to operate without having to continually absorb losses, and so it filed a notice of intention.

Foodora says it provided its Canadian workers with notice of the change today and is working on devising a proposal to provide additional recovery to employees and other creditors.

The business operated in 10 Canadian cities over the last five years and had racked up 3,000 restaurants on the platform.

This report by The Canadian Press was first published April 27, 2020.