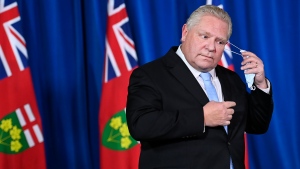 The Ontario government will use its emergency brake and place the province in a shutdown for at least a month to reverse the rapid rise in COVID-19 cases and hospitalizations, CTV News has learned.

Premier Doug Ford is expected to make the announcement on Thursday. According to sources, the shutdown will begin on April 3.

Weddings, funerals and other religious services are capped at 15 per cent capacity indoors.

Restaurants can only offer delivery and take-out services in the shutdown zone.

Personal care services, which were supposed to open on April 12 in grey zone regions, will have to remain closed during the shutdown.

Earlier in the day, Ford said that his government will announce restrictions on Thursday as ICU admissions reached a record high.

The latest report from Critical Care Services Ontario (CCSO) reveals that there are now 421 people with COVID-19 in intensive care units, surpassing the peak seen during the second wave of the pandemic in January.

The grim new high comes after 32 more COVID-19 patients were admitted to the ICU on Tuesday and a record 46 admissions on Monday.

“You'll hear an announcement tomorrow but I am very, very concerned to see the cases go up,” Ford said during a press conference on Wednesday in response to a question about why his government isn’t tightening public health restrictions. “I'm very concerned to see the ICU capacity and we all have to be vigilant, and through the holidays over the next few days I'm just asking people don't gather in large groups, don't have big, big gatherings, follow the protocols of the Chief Medical Officer and we'll be able to get through this.”

That, along with the surging case numbers, have put the health-care system under immense pressure and have forced some GTA hospitals to transfer patients as far away as Kingston in a bid to free up space in their ICUs.

On Wednesday afternoon the COVID-19 Modeling Collaborative released new projections suggesting that the province is on track to have roughly 700 COVID patients in intensive care the second week of April and more than 800 the following week.

It says that in a worst-case scenario in which cases grow by an average of seven per cent each day, the number of COVID patients in intensive care could surpass 1,800 by the end of the month.

“If the premier doesn’t announce some sort of immediate implementation of public health measures I think he will be abdicating his responsibility to the citizens of Ontario,” Dr. Michael Warner, who is the director of critical care at Michael Garron Hospital, told CP24 earlier on Wednesday morning, prior to Ford’s remarks. “The writing is on the wall. We need to press the pause button. We have to follow the health information and (Chief Medical Officer of Health) Dr. David Williams needs to step up and say that people are getting hurt here and the pandemic is out of control and unless we regain control so many more people will die.” 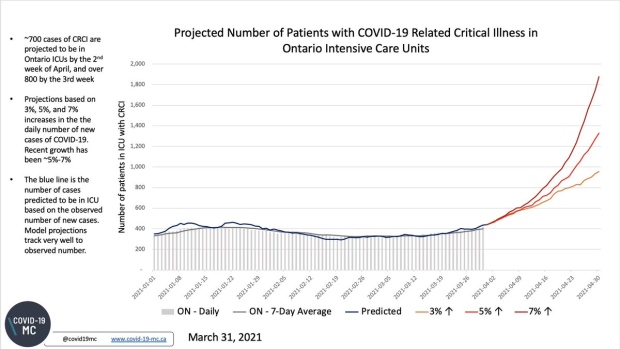 The Ford government has moved to loosen public health restrictions over the last few weeks despite rising case numbers.

Last week it announced that it would permit dining at bars and restaurants in lockdown zones and expanded the capacity for indoor dining in red zones.

It has also said that it will allow personal care services to reopen in lockdown zones as of April 12.

On Wednesday, Ford did not provide any specifics on what tomorrow’s announcement might entail but said that there is at least now “light at the end of the tunnel” provided by the increased availability of vaccines.

In a subsequent scrum with reporters at Queen’s Park. Health Minister Christine Elliott said that cabinet will be reviewing new modelling this afternoon and discussing next steps.

She said that the province is ready to open another 80 beds at a field hospital at Sunnybrook Health Sciences Centre but acknowledged that firther public health restrictions may also be necessary to reduce the spread of the new variant.

“We want the people of Ontario to rest assured that while the situation is concerning we will make sure there is capacity both in terms of expanding our physical capacity and in terms of the considerations we will be dealing with in cabinet this afternoon,” she said.

One out of four ICU patients in Toronto has COVID-19

Right now nearly one out of every four patients in the ICU in Toronto hospitals has COVID-19, according to the CCSO report.

But at some hospitals the situations is much more dire.

At Humber River Hospital’s Wilson campus there are 43 patients in the ICU and 24 of them are being treated for COVID while at Markham Stouffville Hospital half of the 24 ICU patients have COVID-19.

Meanwhile Cortellucci Vaughan Hospital, which is using its ICU to exclusively treat COVID patients, now has 32 of its 35 available beds filled

“Last week we had one COVID patient (in the ICU at Michael Garron), now we have 11. The average age is 58 ranging from late 30s to 80 years old and nearly all of them are essential workers or are related to an essential worker through a family contact,” Warner said. “These are not people who are disobeying the rules. These are people who are trying to make a living and haven’t been afforded the protection necessary to minimize their exposure risk.”

Warner told CP24 that if Ford were to announce new restrictions today the number of COVID patients in intensive care units would still likely top 500. But he said that if he fails to act “things could get really bad.”

NDP Leader Andrea Horwath also weighed in on the situation while speaking with reporters at Queen’s Park on Wednesday morning, calling another lockdown inevitable at this point.

“We are here because Doug Ford decided to ignore the advice and walk us straight into a third wave and what looks like an inevitable lockdown and this is all on Doug Ford,” she said. “Lets not forget that back in February the science table clearly laid out where this was going and the government chose to ignore it. Doug Ford decided to ignore it and in fact told people that the numbers were looking rosy as they acted to life the public health precautions and not invest in things that we know would stop the spread.”

‘This is the biggest health-care crisis I would say in modern Ontario health care’: OHA president

The president of the Ontario Hospital Association says the situation in hospitals is the most serious it's ever been since the pandemic began.

Anthony Dale told CP24 Wednesday evening that the stay-at-home order in January stabilized cases in the province, but the number of patients in critical care mainly stayed in the low to mid 300s.

"That's a very high starting point for a third wave, and unfortunately, this third wave is a much different pandemic with the new variants, especially the U.K. variant," Dale said.

"Community spread is now out of control and we're seeing, unfortunately, the results with faster rates of hospitalization and very rapid admissions to critical care."

He said if the worst-case scenario of more than 2,000 ICU patients is reached in the coming weeks, there would be a historic mobilization of health care workers to staff critical care beds. That means a widespread cancellation of elective or scheduled surgery, Dale warned.

"This is the biggest health-care crisis I would say in modern Ontario health-care history and I don't say that lightly," he said.

"Having this number of patients in critical care who need to be kept alive – they need to be kept alive because they're so ill – it's starting to also crowd out the needs of people who are critically ill who have other health care needs, health care needs that don't stop because there's a pandemic whether it be heart disease or cancer or even organ transplantation. That's the hidden crisis that many people may not be aware of."

But that redeployment may not be enough to deal with the situation, Dale said.

"Hospitals will move heaven and earth to make sure that quality of care is maintained. But I have to say to you with great reluctance that the normal staffing levels, the normal things that a hospital would do to look after a critically ill patient, it won't be possible in every instance, despite every best effort, not at those levels."

Dale said he had extensive discussions with Elliott on Tuesday about the situation hospitals are facing. He said he and many in the medical field know that another lockdown is a hard ask, especially for many businesses that have struggled throughout the pandemic.

"We have extraordinary respect for the sacrifice that so many businesses and workers are being asked to undertake. And I think we should take a moment and acknowledge that. We're asking people to do the extraordinary a third time. it is for the greater good."

Dale said that public health measures work against the virus and the run to the COVID-19 finish line will be backed by mass vaccinations.

"We need the federal government, the provincial government, public health hospitals, primary care, frontline physicians, everybody who can lend a hand in the mass vaccination effort to focus and mobilize on getting as many vaccines in arms as soon as possible because, in the end, that is the that is the way out."