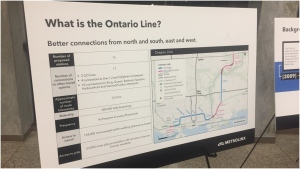 The Ford government will soon begin the procurement process for the Ontario Line subway but it is choosing to split the project into two segments and will not seek out companies to design and build the northern portion terminating at the Ontario Science Centre, at least initially.

Transportation Minister Caroline Mulroney announced on Tuesday morning that the province would begin the procurement process for the 15.5-kilometre line by issuing two Requests for Qualifications (RFQs).

According to the bid documents posted online, the southern portion of the line which will go to procurement first will be about seven kilometres with six kilometres of that underground. It will include seven of the 15 planned stations slated for construction as part of the Ontario Line and terminate somewhere between Corktown and just west of the Don River.

“What we are looking for right now is to ensure the bidding process and the procurement process is as competitive as possible,” Mulroney said during an interview with CP24 on Tuesday. “We want to attract people from around the world so that we can deliver what people in the GTA so desperately need which is a high quality transit system.”

The City of Toronto had been pursuing its own vision for a relief subway line that would have begun at Osgoode Station and travelled along Queen Street and Eastern Avenue before turning north at Carlaw Avenue and connecting with Line 2 at Danforth Avenue.

That plan was ultimately scrapped after the Ford government promised to spend billions on building four major transit projects in Toronto, including the so-called “Ontario Line.”

The $11B project is also intended to act as a relief subway line that will take some of the pressure of Line 1 but it will be much larger in scope and span from Exhibition Place in the west and the Ontario Science Centre in the east via the downtown core.

Ford government officials have said that they believe the line can be built by 2027 by using “alternate technology” other than the TTC’s existing subway cars.

Experts, however, have cast doubt on whether that timeframe is realistic.

In the release issued on Tuesday, the Ford government does not make any reference to a completion date and Mulroney only told CP24 that her government’s goal “is to get shovels in the ground as quickly as possible.”

“Ultimately our goal with today’s announcement is to go to market so that we can begin the process of attracting bidders, identifying and qualifying the, so we can finally get to the point that we get shovels in the grounds for the delivery of these projects,” she said.

No date for when construction will begin

Then transportation Minister Jeff Yurek told CTV News Toronto last April that the government had hoped for construction to begin on the line by the end of 2020, though it is unclear if that timeline still holds.

The release says that Infrastructure Ontario and Metrolinx will evaluate all submissions and will “shortlist” teams to be invited to respond to a formal Request for Proposals in the fall.

It says that a total of three contracts will ultimately be awarded as part of the construction of the line, though it notes that some segments “where the alignment joins GO Transit rail corridors, will be procured separately.”

Toronto has commuted to funding nearly 27 per cent of the total capital cost of the Ontario Line using money it had set aside for its relief line project. The Ontario government has, however, said that the feds will have to come to the table to cover a portion of the price tag.

The TTC will be responsible for the day-to-day operations of the line in keeping with an agreement signed in February, though the release says that the chosen companies could be responsible for some limited maintenance, including “re-establishing Ontario Line operations” in the event of an outage and “coordinating with utility companies."