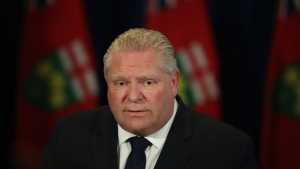 Premier Doug Ford says the province plans to unveil its “detailed testing strategy” at some point next week.

Speaking at Queen’s Park on Sunday morning, Ford did not say specifically when the plan will be released but noted that the province intends to target “various sectors” and COVID-19 “hot spots” around Ontario.

Ford said increasing testing in the province is one of the “best defences” against the virus until a vaccine is developed.

“I'm asking the people of Ontario, if you are worried if you have COVID-19, or that you've been exposed to someone who has COVID-19, even if you are not showing symptoms, please go get a test.”

Ford added that no one will be “turned away” from a testing centre.

“You don't need an appointment, just show up to a testing centre,” he said. “Bring your family along with you to get tested.”

The premier’s announcement comes after new cases in the province have slowly continued to rise over the past week.

Ontario confirmed 460 new cases of the virus on Saturday, up from the 412 reported on Friday and 441 on Thursday.

The province has also consistently failed to meet its testing targets over the past week.

Despite having the capacity to turn around approximately 20,000 tests per day, only 11,383 were conducted on Saturday and 11,028 tests were completed on Friday.

Just 5,813 tests were processed on Monday, a dip that Ontario’s chief medical officer of health attributed to low turnout at assessment centres over the long weekend.

“Our best defence right now is to ramp up testing,” Ford said on Sunday.

He added that seeing an increase in the number of tests and a decrease in new cases each day is the only way the province can continue to reopen more parts of the economy.

“We can open up the economy if we see the numbers go down. That's the only way we can continue opening up,” he said.