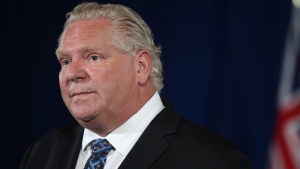 The Ford government is giving cities another $150 million to help them increase shelter capacity, but the Premier says any major rescue package to keep cities from making drastic cuts this fall will have to come from the feds.

The province is adding $150 million to its Social Service Relief Program, bringing the total spent since the COVID-19 outbreak began to $350 million.

Cities will be able to use the money to increase shelter capacity and develop new programs to help the under-housed or disabled weather the storm caused by the pandemic.

Toronto Mayor John Tory welcomed the money, saying it could be a sign of what's to come.

"Today’s announcement is a clear indication that the province is listening to municipalities and wants to work with us in addressing the financial impacts we are enduring as a result of Covid-19," Tory said. "It would be made even more effective if we could be assured that the federal government would match this kind of assistance pursuant to the requests we have made to both governments."

But with several large Ontario cities staring down shortfalls in the hundreds of millions or even $1.5 billion in Toronto’s case, Premier Ford’s message was Ottawa needs to “just cut us a cheque.”

“Just send us the money and it’s done,” For said. “There’s only so much capacity the municipalities have.”

So far, Ottawa has offered the provinces $14 billion combined to cover costs associated with reopening their respective economies, but the money must be allocated into seven categories of spending developed by the Trudeau government.

Most premiers said last month that the money offered was not enough.

“We need a cheque – we’re going to follow the guidelines and make sure they’re allocated in the right areas but we’ve been saying this over and over again and all the premiers agree,” Ford said. “We need one thing – we need flexibility and we’ll work within their guidelines but we need the flexibility to put the money where it is needed.”

He said that different cities have different needs.

“If you talk to Toronto – they need a big chunk of it in transit.”

In April, Mississauga officials said the city was facing at least a $60 million deficit due to COVID-19.

In Ottawa, the deficit for the year is now approaching $200 million.

Ontario’s mayors have employed a variety of tactics to get the attention of Queen’s Park and Ottawa.

Toronto Mayor John Tory went so far as to outline what he’d need to cut in the fall in order to balance the city’s operating budget without outside help.

He said in the worst case scenario, the city would have to shutter entire subway lines, close libraries and lay off hundreds of police officers without assistance.