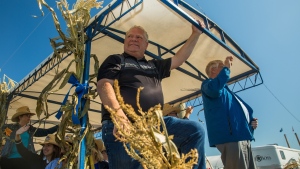 Ontario Premier Doug Ford pitted the provinces against the federal government Friday as he made his pitch to bolster cross-border trade during a visit to the United States.

Ford, who is on a trade mission to Ohio, took part in a fireside chat with Alberta Premier Jason Kenney at the North American Strategy for Competitiveness gathering.

While discussing the oil industry and the construction of pipelines, Ford said Ottawa “doesn't see eye to eye with a lot of the premiers.”

He went on to explain that many provinces had gone Conservative recently, calling it “a clean sweep right across the country.”

Ford later called himself a “big Republican” and repeated that the provincial and federal governments were not always aligned.

Ford and Kenney were also set to meet with Ohio Governor Mike DeWine on Friday afternoon.