Ford to make announcement alongside minister of children, community and social services 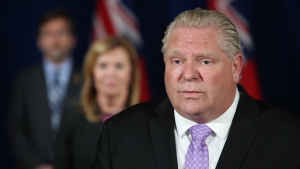 Premier Doug Ford will make an announcement alongside Minister of Children, Community and Social Services Todd Smith at Queen’s Park this afternoon.

Ford has been making daily announcements since the beginning of the COVID-19 pandemic as part of his government’s efforts to limit the spread of the virus and, more recently, to gradually restart Ontario’s economy.

Today’s announcement, scheduled for 1 p.m., comes after Ford told reporters on Wednesday that officials were considering the reopening of restaurants patios but would likely to do so on a region-by-region basis.

That, of course, would mean that restaurant patios in harder-hit areas like the GTA could remain shuttered for the time being.

“It is one of the areas we are looking at with a regional opening,” Ford said. “I know a lot of the people in the rural areas want that.”