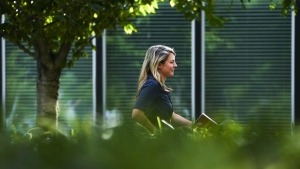 Minister of Foreign Affairs Melanie Joly leaves after speaking to media at the United Nations in New York on Tuesday, Sept. 20, 2022. THE CANADIAN PRESS/Sean Kilpatrick

OTTAWA - Foreign Affairs Minister Melanie Joly urged countries to uphold women's rights and abortion access on Monday, while Canada announced looming sanctions on Iranian officials over the death of a young woman who was detained by the country's morality police.

In a speech to the United Nations General Assembly, as the global gathering draws to a close, Joly summarized Canada's priorities and concerns in foreign relations, including by calling for more multilateral solutions to problems like climate change and sexual violence.

Canada ispart of “a global coalition in support of equality” that will “repel these increasing attacks on women's rights and freedoms,” she told the assembly in French on Monday.

“Sexual and reproductive health rights for women and girls are being rolled back or denied in too many countries,” Joly said in English.

“Canada will always stand up for your right to choose.”

Though Joly did not mention the United States in this section of her speech, her comments come after months of backlash to the U.S. Supreme Court decision allowing states to ban abortions, with some seeking to prosecute those who help people end their pregnancies in other jurisdictions.

“We will speak up for your rights and dignity. No government, no politics, no judge - no one can take that away from you,” Joly said, which prompted applause.

The speech also cited Iran's crackdown on protesters seeking accountability after the death of 22-year-old Mahsa Amini, when morality police arrested her for “unsuitable attire” in allegedly wearing a hijab improperly.

In a news conference on Monday morning, Prime Minister Justin Trudeau said Canada is sanctioning dozens of Iranians, including the morality police, as a result.

“To the women in Iran who are protesting and to those who are supporting them: we stand with you.”

Joly's office could not provide a list Monday of whom Canada will sanction.

“We will be able to provide more details on these sanctions in due course,” wrote her spokesman Adrien Blanchard.

The Conservatives have called on the Liberals to fulfil a motion Parliament passed in 2018 to deem Iran's political police, the Islamic Revolutionary Guard Corps, a terrorist group. Only the force's clandestine branch has that designation.

On Monday, Joly also noted that Ukrainian women have been subjected to sexual violence in Russia's ongoing occupation.

She argued that deliberate policy choices are resulting in rising violence against women, who are excluded from “the negotiating table, the boardroom, the classroom.”

Her speech also called out the “abusive” use of veto powers by permanent members of the UN Security Council, such as Russia and China.

She said countries need to be deterred from violating human rights, particularly after a UN report found China may have committed crimes against humanity in its treatment of Uyghur Muslims.

“Those who break the law must be met with the force of the law. A permanent seat on the Security Council is not a licence to kill, nor to silence anyone, and it should never guarantee impunity,” Joly said.

She also said Canada would support “a fair and equitable reform” to global financial institutions, so they can better help developing countries respond to crises.

In Joly's view, countries need to work closer together to navigate economic, political and environmental tumult.

“There are no simple solutions to the challenges we face. But it is obvious that to isolate oneself, to disregard the rule of law and to silence people, is contrary to progress.”