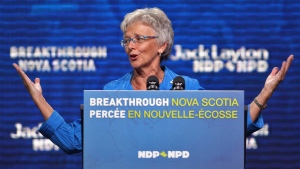 HALIFAX - Former federal NDP leader Alexa McDonough, a political trailblazer who paved the way for women in politics, died Saturday in Halifax at the age of 77.

Her family confirmed McDonough's death after a lengthy struggle with Alzheimer's disease.

McDonough became the first woman to head up a major political party in Canada when she was elected leader of the Nova Scotia New Democrats in 1980. She became leader of the federal NDP in 1995 and served in the party's top post until 2002.

But in an interview Saturday, Justin McDonough said his mother was a consensus builder who earned respect beyond partisan political lines.

“I think the one thing that I really learned from her is that you can have courageous conversations and you can disagree with someone, but it doesn't mean that you aren't going to be respectful and you're not going to appreciate their opinion,” he said. “Her political life resonated in that regard.”

“The hallmark of Ms. McDonough's long career was her respect for the people she represented,” Houston said. “She was a public servant in the truest sense and she will be sorely missed by people across Canada.”

Known affectionately to many across the country as simply “Alexa,” McDonough was a former social worker who cut her political teeth in the Nova Scotia Liberal Party before switching to the provincial NDP in 1974.

After capturing the party's leadership, she became the first New Democrat from mainland Nova Scotia to sit in the provincial legislature when she was elected in a Halifax area riding in 1981. She was the party's lone voice in the legislature over the next three years.

“These are accomplishments of real historic stature,” said Gary Burrill, the current leader of the Nova Scotia NDP. “She is a big person on the landscape in the history of the province.”

Burrill said Nova Scotia New Democrats have suffered a significant loss and are a “party in mourning.”

McDonough resigned as provincial leader in 1994 and later made the jump to federal politics, where she mounted a challenge for the national party's top job in 1995. She won the federal NDP leadership in an upset over perceived front-runners Svend Robinson and Lorne Nystrom.

She was elected to the House of Commons for the first time during the 1997 federal election, while her party's seat count went from nine to 21. That total included a breakthrough in Atlantic Canada, where the New Democrats took six of Nova Scotia's 11 seats.

“That was a moment that broke the mould of Nova Scotia politics which had been in place for over a century,” Burrill said.

McDonough made her mark federally as a champion of strong social programs and gender equality. She retired from politics in 2008.

Born Alexa Ann Shaw in Ottawa on Aug. 11, 1944, she adopted the name known across the country when she married Peter McDonough in Halifax in 1966.

She is survived by her sons, Justin and Travis, along with seven grandchildren.

This report by The Canadian Press was first published Jan. 15, 2022.