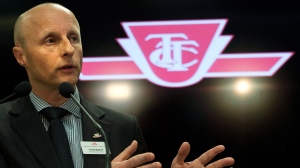 TTC CEO Andy Byford speaks to the media regarding the release of a video involving TTC enforcement officers on Wednesday, April 1, 2015. THE CANADIAN PRESS/Nathan Denette

Former TTC boss Andy Byford will leave his job as the head of New York City’s transit system just two years after taking on the role.

Byford ran the TTC for more than seven years but left the city at the end of 2017 to become the President and CEO of the New York City Transit Authority, a job that he said at the time was “arguably the toughest job in transit.”

While in New York Byford received acclaim for reducing subway delays and obtaining billions of dollars in government funding for critical capital projects.

There were, however, reports of tension with New York Governor Andrew Cuomo, who oversees the system. In October, Politico even reported that Byford had tendered his resignation only to be talked out of it.

In a statement issued on Thursday, the head of the Metropolitan Transit Authority confirmed that Byford would be “departing New York City Transit after a successful two years of service," though no additional details were offered.

In his own statement Byford said that he was “very grateful” for the opportunity “to serve New York and head up North America’s largest transit system.”

“I am very proud of what we have achieved as a team over the past two years and I believe New York City Transit is well placed to continue its forward progress,” he said.

Byford was widely heralded for improving customer service while at the TTC and spearheading needed state-of good repair work, including the overhaul of the subway signal system on Line 1.

In New York he is credited with helping to reduce subway delays by 25 per cent and securing funding for a $51 billion overhaul of the transit network. He was even the subject of a glowing profile in the New Yorker in 2018.

“This is a real loss for New York City’s subway and bus riders,” New York City Mayor Bill de Blasio said in a message posted to Twitter on Thursday. “The MTA needs people like Andy Byford — now more than ever.

It is unclear what Byford will do next.

When he left the TTC, he called the job the “absolute highlight” of a 28-year career that also included senior positions with public transit systems in London, England and Sydney, Australia.