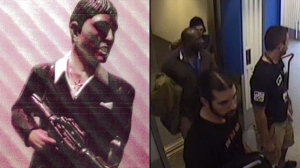 Peel police have launched an internal investigation after a judge found that an officer had taken a large wooden sculpture depicting Tony Montana (left) from the film Scarface while conducting an investigation. (Submitted by Kim Schofield)

Four Peel Regional Police officers have been charged with theft and perjury in relation to a 2014 drug investigation where an accused drug dealer’s sculpture of Scarface’s Tony Montana was stolen from a storage locker.

Back in 2014, the four police officers from the Major Drugs and Vice Unit were searching the property of Lowell Somerville, a man accused of trafficking heroin and cocaine.

They obtained a warrant to search a storage locker he leased.

Surveillance footage obtained by Somerville’s lawyer showed the four officers approaching the locker, and one of them leaving a short time later with a large object in his hands.

The officer said during Somerville’s trial that the object was a space heater left in the hallway of the storage facility with a sign that said “free,” but Somerville contended the item was actually his metre-long hand painted wooden Tony Montana statue.

The judge said that the officer did indeed walk off with Somerville’s statue, and also said that the four officers lied to cover up the act.

Somerville also argued that cash and jewelry was stolen from his locker, but no evidence was available to suggest the officers were responsible.

As a result of the statue theft, Justice Jennifer Wollcombe stayed five drug-related charges against Somerville. But, she stated, it was “highly likely that (Somerville) would otherwise have been found guilty.”

She called the conduct of the officers “not only profoundly disappointing, but shocking.”

“Each officer knew that this was something that they had no right to take,” Woollcombe wrote in her decision in May 2017. “Perhaps because they never suspected a drug dealer would complain or believed if he did, they committed what they knew was a theft of property.”

Somerville’s lawyer, Kim Schofield, told CP24 Thursday that she obtained the security camera footage of the officers attending the storage unit and held onto it until the final portion of her client’s trial.

She said that it was only then that one officer told court about obtaining a free space heater, a story she called “patently ridiculous.”

His peers were just as convincing.

“(The officers) all had this spontaneous amnesia, they said they had never been there like that,” Schofield said.”

After the judge stayed charges against Somerville, Peel Police Chief Jennifer Evans pledged that professional standards section officers would conduct a vigorous probe into the allegations.

On Thursday, all four officers were charged with one count of theft under $5,000, two counts of perjury and one count of obstructing police.

All four officers are suspended with pay per the terms of the Police Services Act.

All four are expected to appear in court in Brampton on June 4.

Schofield said that after the Somerville trial finished with a judicial stay of proceedings, a number of drug cases in Peel Region were thrown out, but then that stopped.

“Initially there were some (drug) cases stayed, but then the crowns were strangely maintaining that they were going to still prosecute. And after that there seemed to be these (four) officers reappearing and testifying in court.”

“So I don’t know how they’re going to explain this now after the officers were actually charged.”