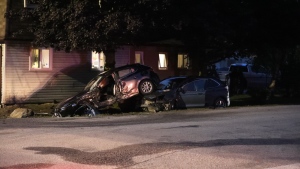 Four people were injured in a two-vehicle collision in Uxbridge Monday night.

It happened just before 8 p.m. in the area of Davis Drive and Concession Road 6.

A spokesperson for Ornge said a man in his 20s was airlifted to a Toronto trauma centre with serious but non-life-threatening injuries.

Three others, who were occupants in one vehicle, were taken to a local hospital. Their injuries are not considered serious.

Durham Police said the crash might have been caused by one of the drivers missing a stop sign.