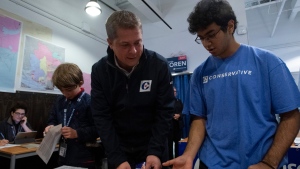 OTTAWA - The contenders in Monday's federal election spent the last day of the campaign calling for voters to unite behind their parties amid accusations of dirty politicking and outright lying.

From when Liberal Leader Justin Trudeau fired the starting gun on the campaign on Sept. 11, voters have heard a mix of policy promises and warnings about dire consequences from each party leader if he or she doesn't come out on top.

The close of what many leaders said was a divisive campaign played out Sunday in one final, frantic barrage of sales pitches in and around Vancouver, where a host of seats are up for grabs.

Trudeau called on voters to swing behind the Liberals, warning of cuts to services if the Conservatives take power.

Conservative Leader Andrew Scheer warned of federal spending that leads to crippling national debt if the Liberals win a minority and are propped up by the New Democrats.

Jagmeet Singh called on voters to give his NDP a chance, while Green Leader Elizabeth May made a promise of electoral reform alongside a vow to mandate honesty from parties during future campaigns.

“I didn't think that this election would be so marred by dishonesty,” May said during a morning event.

Polls heading into Monday's vote suggest a deeply divided electorate after a campaign marked by revelations that Trudeau repeatedly wore blackface more than a decade ago; Scheer's dual citizenship with the United States and iffy credentials as an insurance broker; and questions about the federal role in a legal challenge to Quebec's secularism law, known as Bill 21, that is popular in the province but highly controversial.

While four leaders were on the West Coast, Scheer and Trudeau appealed, too, to vote-rich Quebec in the hopes of staunching any bleeding of support to the Bloc Quebecois, whose surge in recent polls has been one of the key surprises of the campaign.

On Saturday night, party leader Yves-Francois Blanchet rallied supporters by talking about the environment, but also talking about his party's revival with a reference to sovereignty as a possibility one day.

Trudeau warned Blanchet's “No. 1 priority is separation” - not fighting climate change or “even to stop Conservative cuts” - and returning the countries to debates thought dormant, as part of a message to Quebec voters to support the Liberals.

Not long after, Scheer said Blanchet's “priority is to work towards another referendum,” in making the case for Quebecers to vote Conservative.

Blanchet, in Quebec, said separation is not a priority for his party now, nor is a referendum on the matter imminent, and said Trudeau was “purposefully lying” to Quebecers - comments he made before Scheer spoke in Vancouver's Stanley Park.

“We thought that Mr. Trudeau was offering a clean campaign. This is over now. Now he is lying,” Blanchet told reporters.

“If he listened to what I said yesterday, he obviously noticed that I said even if I do personally believe - and that's a surprise for nobody - that one day, at a time of their choice and in a manner of their own choosing, Quebecers might consider again giving themselves a country, in the meantime, I understand that this is not our mandate.”

May was also heavily critical of what she called “dirty smears” from other parties, and the New Democrats in particular, after a heated war of words with NDP Leader Jagmeet Singh over abortion.

She said she believed she had a good relationship with Singh - May decided not to run a Green candidate in a byelection that gave the NDP leader a seat in the House of Commons earlier this year - but that now appears to be in tatters.

Singh, before mainstreeting in Vancouver and Surrey, B.C., said he had no regrets about the campaign.

Any divisions in the country are a result of economic insecurity, exacerbated by the policies of successive Conservative and Liberal governments, Singh said. The NDP leader suggested his party's platform commitments would bridge any divides when asked about specific actions he would take to bring the country together if he becomes prime minister.

Meanwhile, People's Party of Canada Leader Maxime Bernier wrapped up his campaign in his Quebec riding of Beauce, defending his own seat.

He is scheduled to vote mid-morning in his riding - just as millions of Canadians will do Monday.