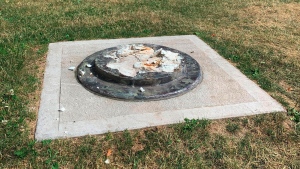 This photo provided by WROC-TV shows the remnants of a Frederick Douglass statue ripped from its base at a park in Rochester, N.Y., Sunday, July 5, 2020. (Ben Densieski/WROC-TV via AP)

ROCHESTER, N.Y. - Police in Rochester are trying to determine who ripped a statue of abolitionist Frederick Douglass from its base on the anniversary of one of his most famous speeches.

Police say the statue of Douglass was taken from Maplewood Park and placed near the Genesee River gorge on Sunday.

On July 5, 1852, Douglass gave the speech “What to the Slave is the Fourth of July” in Rochester.

There was no indication the vandalism was timed to the anniversary.

The park was a site on the Underground Railroad where Douglass and Harriet Tubman helped shuttle slaves to freedom.