Fredericton woman was in Toronto as Danforth attack unfolded 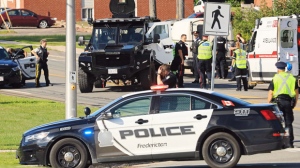 Police and RCMP officers survey the area of a shooting in Fredericton, N.B. on Friday, August 10, 2018. THE CANADIAN PRESS/Keith Minchin

In her Fredericton home, Alexandra Bain woke up to a phone call from a relative in Halifax, telling her to lock her doors and stay inside.

She heard sirens outside as she watched the news develop, and messages poured in from concerned friends and family around the world.

"I was woken up by somebody in Halifax telling me, and within minutes friends were texting from Croatia. It sure hit the news fast," said Bain, who turned 63 Friday.

For Bain, the news was especially unsettling just weeks after she sat a few blocks away from a gun attack in Toronto's Danforth neighbourhood.

On July 22, Bain was sitting with her family at City Betty restaurant on the Danforth when news broke that a shooter had opened fire nearby.

"My son-in-law looked at his phone and said 'Holy (expletive), there's an active shooting just down the street,"' Bain recalls.

The attack claimed the lives of a 10-year-old girl and an 18-year-old woman, and injured 12 others.

Bain -- whose Fredericton home is a fair distance from Brookside Drive, the site of Friday's shootings -- was emotional thinking of the victims of both attacks and their families.

"I'm praying for everyone who was involved and who lost loved ones. And I hope this stops."