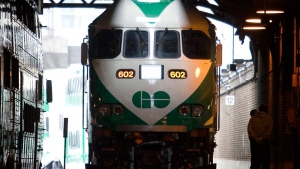 A GO Trasnit locomotive sits on the tracks at Union Station in Toronto, Tuesday, Jan. 15 2008. THE CANADIAN PRESS/Adrian Wyld

A freight train derailment west of Toronto is causing disruptions for commuter trains into the city this morning.

It says a train scheduled to leave from West Harbour station in Hamilton has been cancelled, while passengers trying to catch a train from Aldershot or Appleby stations in Burlington, Ont., will now have to get on at the Burlington or Oakville stations.

A spokeswoman for Metrolinx, the agency that operates GO Transit, says the freight train derailment is preventing travel into Aldershot station.

Anne Marie Aikins says in a tweet that two of the train's cars derailed.

The freight train unfortunately has two coaches derailed which is preventing us from travelling into Aldershot. Stay tuned for more info https://t.co/Zdojq1cSrv

No other details about the derailment were immediately released.