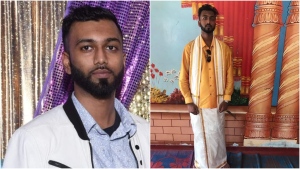 CTV News Toronto has identified Charankan Chandrakanthan, 25, as the fatal victim of a Thursday night shooting in Scarborough. (Supplied)

The victim of a fatal shooting in Scarborough on Thursday night has been identified as 25-year-old Charankan Chandrakanthan.

Family and friends confirmed the victim’s identity to CTV News Toronto on Friday.

Chandrakanthan was gunned down in an industrial plaza in the area of Middlefield Road and McNicoll Avenue shortly before 10 p.m.

Police say he was found in a vehicle suffering from two gunshot wounds.

A post-moretm examination has been scheduled for Saturday.

Police have not released any information on possible suspects but are continuing to investigate the homicide.

Gottell said there were people in the parking lot of the plaza around the time of the shooting who left prior to the arrival of police.

Anyone who witnessed the incident is asked to contact police or Crime Stoppers anonymously.

CTV News Toronto has identified Charankan Chandrakanthan, 25, as the fatal victim of a Thursday night shooting in Scarborough. (Supplied)