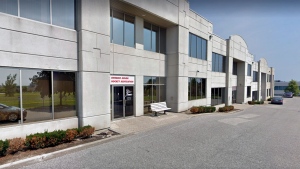 The exterior of the offices of the Ontario Minor Hockey Association is seen. (Google Maps)

A 47-year-old woman has been sentenced to 48 months in jail after pleading guilty to defrauding the Ontario Minor Hockey Association (OMHA) of about $2.4 million.

York Regional Police launched an investigation in November 2018 after receiving a report for missing funds.

Investigators found that during the accused’s time as director of finance with the organization, they stole about $2.4 million. Jennifer Guertin, from the Town of Georgina, was charged in June 2019.

On Sept. 29 2021, Guertin pleaded guilty to theft over $5,000, breach of trust, possession of property obtained by crime over $5,000 and unauthorized use of a computer with intent to commit an offence.

She was handed a 48-month jail sentence and ordered to pay $100,000 in restitution to the OMHA.

Investigators are asking anyone with information or who may have had financial dealings with the accused to contact the York Regional Police Financial Crimes Unit at 1-866-876-5423, ext. 6612, or to reach out to Crime Stoppers anonymously.