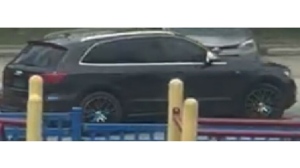 An Audi SQ5 used in an Aug. 9 shooting in Parma Court is shown in a surveillance camera image. (TPS)

Investigators have released a security camera image of an Audi SUV believed to have been used by suspects in an Aug. 9 shooting in Toronto’s Parma Court area that left a 29-year-old father dead.

Police were called to a parkette on Wakunda Place, east of O’Connor Drive, at 2:16 p.m. on Aug. 9 for reports of numerous shots fired.

When emergency crews arrived about four minutes later, police said they found one man with multiple gunshot wounds and then located a second victim after searching farther afield.

One of the victims was pronounced dead at the scene.

Police have identified him as Kevin Reddick.

Investigators said two men were eating lunch when the gunman approached them and opened fire.

Paramedics said they transported the second victim to a hospital trauma centre in serious but non-life-threatening condition.

Friends and family said Reddick had a young daughter and disputed a police suggestion that he had ties to gang activity.

Investigators said that day that two suspects arrived at the shooting scene on foot but left in a dark coloured vehicle.

That vehicle, a 2014 Audi SQ5 SUV, was found on fire the next day at 50 Woodend Place in Vaughan, south of Major Mackenzie Drive and just east of the Kortright Centre grounds.

Investigators say they are asking anyone who may have been in the area of Woodend Place between 11 p.m. on Aug. 9 and the early hours of Aug. 10 to contact them.

They are also asking anyone who was driving on nearby Major Mackenzie Drive during that period who may have dashboard video footage to contact them.