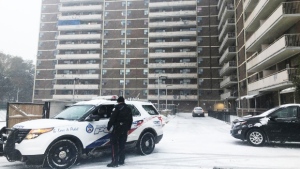 Police are seen outside an apartment building after an air conditioner fell on a child on Nov. 11, 2019. (Corey Baird/CTV News Toronto)

A two-and-a-half year-old girl is fighting for her life in hospital after being struck by an air conditioning unit that fell eight storeys off the side of a building in Scarborough.

Toronto police said they were called to an apartment complex at 3847 Lawrence Avenue East, near Mossbank Drive, sometime before 3:55 p.m. Monday.

According to police, a woman was returning home after picking up her children from school when the AC unit came out of its socket on the window of an eighth floor apartment unit.

“As they were making entry into the apartment complex, a large air conditioning unit had fell from the eighth floor, landing directly on that two-and-a-half year-old baby girl,” Inspector Mandeep Mann told CP24.

He said the horrific incident was witnessed by the child’s siblings, aged five and seven years old.

Paramedics said the child was in life-threatening condition. She was rushed to a hospital trauma centre, where she remains.

Mann said the family is “devastated.”

He said police are speaking with witnesses and reviewing surveillance footage to try and discern exactly what happened.

No one has been taken into custody in connection with the incident.

Police are seen outside an apartment building after an air conditioner fell on a child on Nov. 11, 2019. (Corey Baird/CTV News Toronto)