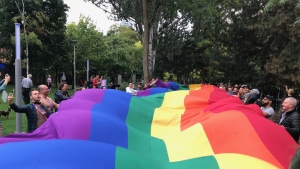 OTTAWA - The federal government is expected to reintroduce a bill that would ban conversion therapy on Monday in a move that would both fulfill an election campaign promise and potentially close loopholes that emerged the last time such legislation came before Parliament.

The bill, if passed, would outlaw practices that seek to change someone's sexual orientation or gender identity.

The pending bill - a beefed-up version of one that died on the order paper when Parliament was dissolved ahead of the September election - would ban the discredited practice both for children and adults. The previous incarnation of the bill prohibited conversion therapy outright for children, but only made it a criminal offence to force adults to undergo conversion therapy without their consent.

The government has said outlawing conversion therapy is a priority, pledging to retable a bill on the issue within the first hundred days of its new mandate, which began when cabinet ministers were sworn in last month. The latest version is expected to be introduced by Justice Minister David Lametti and Gender Equality and Youth Minister Marci Ien.

The previous bill, known as C-6, won backing from most MPs but also elicited strong opposition from more than half of the Conservative caucus.

Opponents criticized the bill, which was heavily amended in Parliament, on the grounds that consent to a practice which causes harm is invalid.

Young people who have “consented” to conversion therapy do not understand what they are getting into, and often do so under duress from family or faith leaders, according to advocacy group No Conversion Canada.

“Our indication is that this is going to be a significantly stronger bill than last time,” said spokesman Nicholas Schiavo. “The fact that it is being introduced so early in the session is very good news.”

The new bill is likely to be backed by the NDP, the Bloc Quebecois, the Green Party, Conservative Leader Erin O'Toole and many of his party members.

But more than half of the Conservative caucus opposed the government's previous attempt to crack down on the discredited practice. Schiavo believes more Tories will be on board with the bill this time around.

Gemma Hickey, who is non-binary, was subjected to “faith-based” conversion therapy as a teenager in St. John's.

Hickey consulted a doctor after becoming attracted to a girl in high school. The family doctor referred them to a therapist who told them that homosexuality was not natural and “against God.” The experience drove Hickey to a suicide attempt, overdosing on pills and alcohol.

Hickey said they were pleased the government was making a ban a priority, saying such a move “has been a long time coming.”

“It is about time this is passed,” Hickey said. “I support a complete ban as this practice is fundamentally homophobic and transphobic and it has no place in Canada, or anywhere else.”

The LGBTQ campaigner said they had been “working towards this for almost 30 years.

“Young people dealing with sexuality and gender identity are very vulnerable and this type of so-called therapy is harmful to vulnerable youth,” they added.

Conversion therapy is banned in several countries around the world, including Malta and Germany.