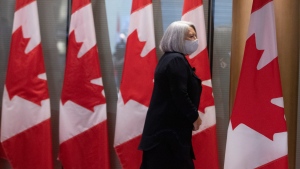 FILE - Governor General designate Mary Simon arrives at the Senate to be installed as the new Governor General of Canada in Ottawa on Monday, July 26, 2021. THE CANADIAN PRESS/Fred Chartrand

OTTAWA - Gov. Gen. Mary May Simon arrives Sunday in Berlin to begin her first international visit on behalf of Canada in the German capital.

May Simon's four-day state visit will include a meeting with Chancellor Angela Merkel, and she will represent Canada at the 2021 Frankfurt Book Fair.

“Canada and Germany have long been allies and friends. A state visit highlights our shared values and strong ties, and also helps support Canadian industries that have been hard hit during this pandemic,” Rideau Hall said Sunday.

In Berlin, May Simon is to visit the Humboldt Forum, which houses numerous Canadian artefacts, including two Indigenous totem poles from the West Coast.

In Frankfurt, she will attend the book fair, which is featuring Canada as the guest of honour this year. May Simon is travelling with an entourage that includes Canada's new parliamentary poet laureat, writer Louise Bernice Halfe, who is also known by the Cree name Sky Dancer, writer Kim Thuy, Lisa Koperqualuk, the vice-president of international affairs for Inuit Circumpolar Council Canada, andMay Simon's husband, former journalist Whit Fraser.

May Simon will also take part in a virtual event with Canadian writer Margaret Atwood.

“Their Excellencies look forward to highlighting and encouraging Canada's authors and businesses at the Frankfurt Book Fair, the world's largest tradeshow for cultural and literary works, considered the Olympics of literature,” Rideau Hall said Sunday.

The Governor General will also attend a roundtable discussion about Arctic exploration, which will be held at the Frankfurt Archaeological Museum.

May Simon was Canada's first ambassador for circumpolar affairs. She was also Canada's lead negotiator in the creation of the eight-country Arctic Council.

The international visit comes a week after May Simon's first formal public appearance in Ottawa, which was at a homeless shelter.

May Simon and Fraser spent an hour at the Ottawa Mission, meeting staff and volunteers and handing out hot meals to dozens of clients lined up down a city block outside.

This report by The Canadian Press was first published Oct. 17, 2021