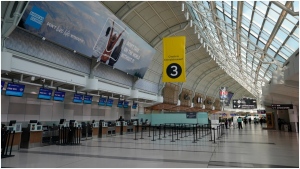 An almost-empty Terminal 3 is shown at Pearson International Airport in Toronto, Friday, March 13, 2020. Provincial governments have advised against international travel and Ontario announced plans to close its schools for two weeks because of COVID-19.THE CANADIAN PRESS/Frank Gunn

TORONTO -- The operator of Canada's largest airport is cutting the size of its workforce by 27 per cent, including some of its management, due to a reduction of air traffic due to the COVID-19 pandemic.

The Greater Toronto Airports Authority announced Tuesday that 500 positions to be eliminated, including 300 that will involve layoffs and voluntary departures.

The rest of the positions are currently vacant.

The GTAA said passenger levels at Toronto's Pearson International Airport have fallen to 1996 operating levels since the pandemic slowed the amount of air travel.

Some of the cuts were effective Tuesday while others will take effect through the fall.

Among the high-ranking departures are two of the GTAA's vice-presidents, whose work will be redistributed under a revamped management structure headed by Craig Bradbrook.

Bradbrook had been the GTAA's vice-president for aviation services and is now in the newly created position of chief operating officer.

“This reduction in force is a difficult but necessary step, and one that we take with great sadness,” GTAA president and CEO Deborah Flint said in a statement.

“We are committed to maintaining our operations and the health and safety of the airport as we evolve our organization to drive our recovery. I am confident that we have a capable and resilient team and the right approach to come through these challenging times with strength.”

Among the management departures was Kim Stangeby, vice-president and chief strategy officer, who had also been GTAA's interim vice-president for human resources.

GTAA said it will complete a search for a new chief human resources officer.

The airport operator says it's also working with the Unifor union and Pearson Airport's firefighter association to implement the changes while respecting their labour contracts.