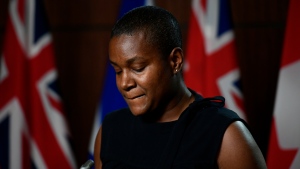 OTTAWA - Green Leader Annamie Paul is facing a no-confidence motion that could ultimately oust her from her perch atop the party.

The leader of the Greens' Quebec wing, Alex Tyrrell, says the federal party's governing body is poised to kick off a process tonight that aims to dethrone Paul less than a year after she won the leadership.

The move follows months of internal strife over the party's direction and the leader's stance on the Israeli-Palestinian conflict.

It also arrives less than a week after Jenica Atwin, one of three Green MPs, defected to the Liberals, citing the “distraction” of party turmoil over the latest Mideast crisis.

Paul said this morning, before word broke of the federal council's motion, that Atwin's stated rationale for crossing the floor was a “completely manufactured reason” and noted that the MP said the Green leader was not a key factor in her departure.

Tyrrell says he believes it's time for Paul to step aside after she failed, in his view, to unite disparate party factions and disavow comments from her former spokesman that called out Green MPs for their vocal support of Palestinians.