Spavor, Kovrig on their way back to Canada: Trudeau

GTA and much of southern Ontario under severe thunderstorm advisory 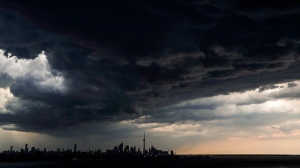 The GTA and much of southern Ontario are currently under severe thunderstorm watches and warnings and areas north of the city are being advised of possible tornadoes as a cold front brings turbulent weather through the region.

“Conditions are favourable for the development of dangerous thunderstorms that may be capable of producing damaging wind gusts, damaging hail and heavy rain,” Environment Canada said in a severe thunderstorm watch issued for Toronto Tuesday evening.

Severe thunderstorm watches and warnings are also in effect for the rest of the GTA, including Peel, York and Durham regions.

Scattered tornado watches and warnings were in effect for a number of areas north of the GTA for much of the day, including Barrie and cottage country, but have since ended.

“A line of severe thunderstorms is expected to move eastward across the regions this afternoon and into the evening. Some of these storms will likely contain tornadoes,” Environment Canada said in an advisory issued Tuesday afternoon.

According to the advisory, the storms could also bring ping pong ball-sized hail, wind gusts of up to 120 kilometres per hour and heavy downpours.

Hydro One advised its customers to keep an eye out for possible outages, stay away from fallen power lines and to check its website for restoration times should people lose power.

The storms are expected to move out of the region by Wednesday morning, Environment Canada said.