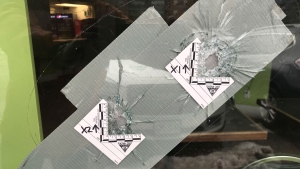 Bullet holes are seen in the window of a store near Markham and Kingston roads. (Nick Dixon/CTV News Toronto)

Mayors from across the Greater Toronto Area are calling on the federal government to toughen bail laws and make needed investments in programming for “at-risk and high-risk young people” amid a rise in gun violence.

The mayors of Toronto, Brampton, Mississauga, Pickering and Markham made the request in a joint statement that was issued following a meeting with federal and provincial government representatives at Toronto city hall on Tuesday.

The statement alludes to the need for further government investment in general but specifically singles out the federal Liberal government. It urges them to “take action” on gun violence in their upcoming budget by introducing tougher bail and sentencing laws that will “send a clear message that gun violence is not acceptable.” It also asks them to make needed investments in youth and family programming to address the root causes of violence and border security to stop the illegal flow of guns into the country.

“Make no mistake we need the support of the other governments, through legal changes, financial support and otherwise, to continue to try to attack this menace that poses such a threat to safety in our communities,” Toronto Mayor John Tory told reporters following the meeting. “Far too many neighbourhoods in all the regions and cities represented today have been terrorized by gun violence and people shouldn’t have to endure that.”

Tory convened Tuesday’s meeting, which was also attended by police chiefs and regional chairs, in order to share best practices and discuss a regional response to the gun violence problem.

He said that one of the things that was clear from the meeting is the “disconcerting” reality that the perpetrators and victims of gun violence “are getting younger and younger” all across the GTA.

He said that in order to address that there needs to be more programming aimed at at-risk and high-risk youth as well as a labour market strategy that will help give them “hope” that there are opportunities out there for them beyond the world of crime.

“We talked about collectively sitting down and looking at every one of the programs we are funding and trying to identify ones where there is a huge return on investment that are working so we can focus on those ones and try to fund those together,” he said.

Bail laws must be ‘substantially toughened’

Premier Doug Ford told reporters last week that the federal government needs to be focusing on bail reform and on Tuesday Tory and the other mayors joined him in that call.

He said that one change that could be made would involve a “reverse onus” being placed on certain offenders facing firearms-related offences.

“When it comes to these people who are being repeatedly arrested on firearms offences and gun violence offences we believe the laws need to be substantially toughened and frankly there has to be some look at how those laws are being administered because clearly there is some disconnect between the intention of those laws and what is actually happening,” he said.

Toronto police say 771 people were injured or killed by gunfire in the city in 2019, up 26 per cent from the year before.

Bullet holes are seen in the window of a store near Markham and Kingston roads. (Nick Dixon/CTV News Toronto)