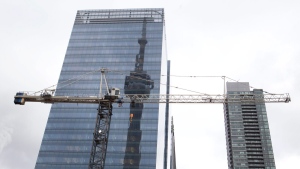 The CN Tower is reflected in a high rise building behind a construction crane in downtown Toronto on Saturday, Feb. 4, 2012. (Pawel Dwulit / THE CANADIAN PRESS)

The five federal ridings in which residents contribute the highest percentage of their incomes to rent are all located within the GTA where affordability issues are expected to be a major topic in the ongoing election campaign.

According to an analysis of all 338 federal ridings that was conducted by a consortium of housing and real estate groups, the Toronto riding of Willowdale has the highest proportion of rental households spending 50 per cent of their income or more on housing (39 per cent) followed by Thornhill (33 per cent), Richmond Hill (32 per cent), Markham-Unionville (32 per cent) and University-Rosedale (32 per cent).

"The data clearly demonstrates that our political leaders have not been able to find or implement meaningful solutions to the affordable housing crisis, and Ontario now has the dubious honour of being harder hit than anywhere else in the country," Marlene Coffey, who is the executive director of the Ontario Non-Profit Housing Association, said in a press release accompanying the analysis.

Affordability has been a hot topic on the campaign trail so far with Liberal Leader Justin Trudeau announcing a plan last week to expand the First-Time Home Buyer Incentive program and introduce a tax on vacant homes owned by non-residents.

NDP Leader Jagmeet Singh also announced on Tuesday a plan to build 500,000 affordable units across Canada over the next decade.

The index, however, looks specifically at rental housing, which it says is an area that is sometimes ignored by policymakers.

All told, eight of the top 10 ridings for the proportion of renters putting 50 per cent or more of their income towards rent are located in the GTA.

The analysis also found that in Toronto young renters (those under 30) contribute more of their incomes to housing than elsewhere with 35 per cent of them exceeding the 50 per cent threshold compared to 23 per cent nationwide.

It also found that renters in the city were among the most likely to reside in homes with an insufficient number of bedrooms.

It said that in Etobicoke North about 33 per cent of renters face overcrowding challenges as defined by Statistics Canada, which is second only to Nunavut (34 per cent). Humber River– Black Creek (33 per cent), Scarborough – Guildwood (30 per cent) and Scarborough Centre (28 per cent) rounded out the top five.

"For a long time, the conversation around rental housing affordability in Canada has focused on the population as a whole, but the numbers clearly show several key, vulnerable groups are bearing the brunt of this crisis," Jeff Morrison, executive director of the Canadian Housing and Renewal Association, said in the press release. "We very much hope that those seeking office in this election and Canadian voters will use this opportunity to push for more immediate and substantial action on this critical issue."

The rental housing index is based on an analysis of Statistics Canada’s data from the 2016 census.