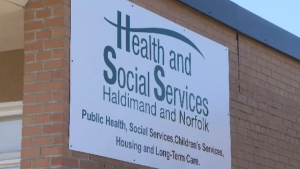 Ontario’s top public health official says that he has no plans to veto the appointment of the new acting medical officer of health for Haldimand-Norfolk despite public outcry over social media posts critical of the public health measures put in place to control the spread of COVID-19.

Dr. Matthew Strauss has come under fire in recent days for dozens of social media posts opposing lockdowns and appearing to express a preference for the approach taken in Florida, where officials have eschewed mask mandates and other measures used elsewhere to limit COVID-19 transmission.

But on Monday night Haldimand-Norfolk’s board of health voted 8-1 to keep Strauss as its acting medical officer of health following a two-and-a-half hour meeting that was mostly held in-camera.

Asked about that decision on Tuesday, Ontario’s Chief Medical Officer of Health Dr. Kieran Moore said that Strauss “does not have the qualifications” to be made permanent but he said that he will “support him” as much as possible as he assumes the top public health job on a temporary basis.

“He is only an interim and staying as an interim,” he insisted. “He cannot be a permanent. A permanent would need the approval of the minister as well as a review by the chief medical officer of health and he does not have the qualifications to be a permanent.”

Strauss works as an assistant professor of medicine at Queen's University but has also been an outspoken critic of lockdowns and other public health measures on Twitter.

In April as the third wave of the pandemic worsened in Ontario he tweeted “If you think that lockdowns work, feel free to lock yourself down indefinitely.”

Then on Aug. 29 with case counts again rising in Ontario he tweeted “live free or die.”

During Monday’s meeting Haldimand County Mayor Ken Hewitt described the social media posts as “edgy” but said that “everyone sitting around the table” would have similar concerns with “how shutdowns occurred” in Ontario.

Hewitt also said that Strauss has been clear that he supports vaccination.

For his part, Moore said that his office will “provide guidance and support” to Strauss “as he may be new to outbreak management and the immunization strategy.”

But he said that he will also “be monitoring adherence to best practice in that region” and reserves the right to intervene if need be.

“If have any concerns regarding the safety and health of that community I can step in as the chief medical officer of health and I will,” he said.