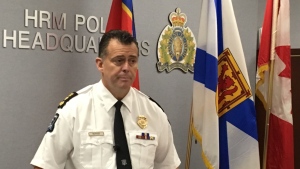 Halifax's police chief has set the date for a formal apology to Nova Scotia's black community over the practice of street checks.

Chief Daniel Kinsella says by email that he'll make the apology Nov. 29 at the Halifax Central Library and he will further outline plans for “meaningful action” to follow the apology.

Kinsella had announced an outline for his plan to the city's board of police commissioners on Oct. 21, saying African Nova Scotians have endured generations of inequity, and street checks deepened the divide between police and the community.

The Nova Scotia government has announced it will permanently ban the practice after retired chief justice Michael MacDonald issued a formal opinion that it is illegal as practised in Nova Scotia.

MacDonald's report defined street checks as stopping citizens without specific reasons and asking for personal information, then keeping those records.