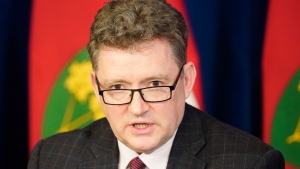 One of the key figures from Ontario‘s early response to the COVID-19 pandemic is permanently leaving his post due to health issues.

Public Health Ontario said Thursday that Dr. Peter Donnelly will not be returning as CEO of the organization. Donnelly said in April that he would be temporarily stepping down from his post for medical reasons.

In a statement Thursday, PHO said that he has decided to permanently step away from his role because of heart problems and in order to relocate to the U.K. to be with family.

“Having experienced cardiac symptoms over a number of weeks, it is now clear that it is important for me to return to the United Kingdom where all of my family are based,” Donnelly said in a news release. “The Board and I have reached the very difficult decision that it is best for me to be released from my contract early.”

Donnelly said “it has been a privilege” to head up PHO over the last five –and-a-half years.

“I am very grateful to have had that opportunity and I wish the organization and its hard-working and talented staff every success for the future,” he said.

Donnelly was front and centre in the province’s response in early April when he unveiled modelling which projected that Ontario could see somewhere between 3,000 and 15,000 deaths related to the pandemic.

Public Health Ontario is the provincial agency tasked with providing advice and support to key government actors, including the chief medical officer of health, the Ministry of Health and Long-term Care, and local public health units.

The PHO board has asked Colleen Geiger to continue in her role of acting president and CEO until the board decides on a permanent replacement.