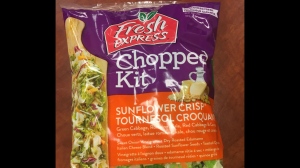 The Canadian Food Inspection Agency has issued a recall for 315 gram Fresh Express brand Sunflower Crisp Chopped Kits with best before dates up to and including December 7th, 2019.

The kits have UPC codes beginning with the letter "Z," indicating Salinas, California, as a source of romaine lettuce.

The Public Health Agency of Canada says at least 10 people have become sick in Ontario, three in New Brunswick and one each in Quebec, Nova Scotia, and Newfoundland and Labrador.

Last month the U-S Food and Drug Administration said it was investigating an E. coli outbreak that has sickened 40 people in more than a dozen states, and told people to avoid romaine lettuce grown in Salinas, California.