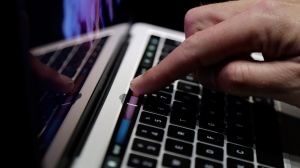 In this Oct. 27, 2016, file photo, a guest looks at the Touch Bar on a MacBook computer in Cupertino, Calif. (AP Photo/Marcio Jose Sanchez, File)

Spring break is over in most of Canada but provincial governments and teachers' unions are still trying to figure out how learning will resume at home, which for many parents has been transformed into a workplace and now a classroom.

Shelley Morse, president of the Canadian Teachers Federation, said her main concern is that some students won't have access to the technology they need to continue schooling at home during the COVID-19 pandemic.

"If you only have one device in your household and two parents need it for work and students need it for their school work it's going to create many challenges and create inequities for sure," she said from Wolfville, N.S.

"We have issues all across Canada with high-speed internet and the fact that in some areas you don't even have that."

Prime Minister Justin Trudeau has said he will make a COVID-19-related announcement in the coming days pertaining to youth. Morse said she hopes will involve access to technology for students.

Karl Butler, a Grade 12 student in Guelph, Ont., has been grappling with at-home schooling.

"For some classes they have plenty of communication with us so we can actually do stuff in those classes, but for other classes they're like, do work you had before. Good luck. And that's about all they've told us."

A video conference in a computer science class has allowed students to ask questions while lessons and worksheets have been posted online for a physics class, said Butler, who is aiming at a career in engineering.

"It's just hard not being able to ask any questions to the teacher from the lessons so you're not fully understanding it going into the worksheet. And as well they can't walk through a problem with you so you don't really know how they want it for a test."

Butler said students also worry how their marks from limited tests they took at school will factor into acceptance by universities.

Butler, who has applied to three universities in Ontario and one in British Columbia, said he sympathizes with teachers as they await direction from their unions via Ontario's Education Ministry on how to teach remotely.

The Ontario government has said classes will resume in two weeks following March break. In British Columbia, schools are closed indefinitely while the B.C. Teachers Union and the Education Ministry come up with a plan.

Ontario Education Minister Stephen Lecce said he has been in discussions with the presidents of teachers' unions in that province on how to support students at home.

In a statement, he said they are also discussing strengthening professional development for teachers to better support students online and outside the classroom, as well as professional care on issues like mental health and special education needs.

In an online video message, schools superintendent Jordan Tinney told teachers in Surrey, B.C., that they should remain out of their schools unless a principal has asked them to go to the building.

A rotation will be arranged so staff to get any needed materials, said Tinney, whose school district is the largest in B.C.

"If teachers need technology and photocopying, we need to know when they will be in the building, who will use the copier, and then we will have a cleaning protocol for the copier after each use and for any classroom they have visited."

Jacqueline Loewen, who teaches kindergarten in Delta, B.C., said teachers in the district expect to get more information through an online conference next week but there's a lot of uncertainty about how students will be taught.

"It's been a very anxious kind of time wondering what is expected of us," she said, adding she may post a video of herself reading a book and ask parents to help her students respond to it.

Loewen said she is concerned about the impact of an ongoing disruption to classroom learning for children.

"If it goes as long as to the end of June, then September will be a whole different start than usual because our kids will be at different levels depending on how much they were able to do with their family, because even over summer kids regress," she said.

Loewen is also worried about children whose mental health and learning needs are not being met by specialized school staff as well as students who depend on breakfast and lunch programs at school.

This report by The Canadian Press was first published March 29, 2020.