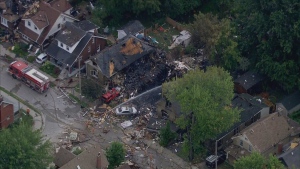 LONDON, Ont. -- A gas explosion and a large fire that triggered the evacuation of a London, Ont., neighbourhood has taken an emotional toll on the community and first responders, one of the city's top fire officials said Friday as residents returned to their homes.

Seven people were injured and residents of 100 homes had to leave after a vehicle slammed into a home and hit a gas line, setting off the explosion Wednesday night. The fire sparked by the blast spread to several homes and at least two residences had to be demolished Friday, the city said.

"It's been very traumatic for everybody involved," said Jack Burt, the city's acting deputy fire chief, adding that mental health workers have been made available to residents and first responders.

"We're really working to make sure these people can get their lives back together," said Burt. "We want to try to do everything we can to lessen their trauma."

All but 10 of the 100 home evacuated were declared safe by Friday, and Burt said the fire department was working as quickly as possible to clear the scene.

He said some of the homes deemed unsafe can be repaired while others are "severely damaged" and may have to be bulldozed. Burt said the homes demolished on Friday were beyond repair.

The city said it would provide accommodation for those who were unable to return home.

"The vast majority of residents are now safely back inside their homes and clean-up work in the surrounding areas continues," said London Mayor Ed Holder. "We recognize, however, this is just the first step in what will be a long period of recovery."

A Facebook group for the London neighbourhood is filled with posts from the community offering up food and clothes to those affected and nearby businesses are offering their services free of charge. Multiple GoFundMe campaigns have also been launched.

"This neighbourhood really banded together to make sure everyone was OK," said Burt. "It's a true testament to this neighbourhood's community spirit and it makes me very proud."

London police said Daniella Alexandra Leis, a 23-year-old woman from Kitchener, Ont., was charged with impaired driving in connection with the incident.

The seven people injured were four firefighters, two police officers and one civilian. Burt said one firefighter was still in hospital in serious condition.