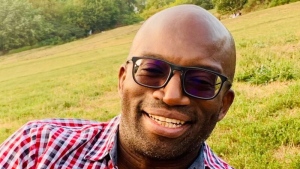 Ikechidiadi (Ike) Kaja, 49, is seen in this undated photograph provided by Toronto police.

A father and financial analyst who had been fighting for his life since he was shot outside his home in Midtown Toronto on Sunday succumbed to his injuries Wednesday, police said, leaving friends and family in disbelief.

Ike Kaja, 49, was a genial and sweet person who was not a risk taker and was so concerned about COVID-19 he would only meet outside, said his friend Katia Millar.

“When I heard the news I was heartbroken for him and his family and his four-year-old son and all the people who love and care for him,” Millar said.

“This is someone who was not involved in any kind of trouble or anything. He was scared of COVID more than anyone. He was cautious and careful in everything in his life,” Millar said.

Toronto police were called before midnight to Avenue Road near Eglinton Avenue around 10 p.m. on Sunday. When officers arrived, they found a man suffering from life-threatening injuries in a car behind the property.

Millar said Kaja had just dropped off his four-year-old son and was coming home.

He was taken to hospital, where he died on Wednesday.

Flowers were dropped off at Kaja’s home on Avenue Road on Friday, with neighbours describing the killing as a complete surprise.

Kaja was a financial analyst. He completed an MBA at Rotman School of Business. He grew up in Nigeria but called Maryland home where he worked as an accountant until he moved to Toronto at age 34.

In an article on FT.com he described his love of the stock market, saying he wanted to come to study in this city because it was a financial hub.

“The icing on the cake: I have the opportunity to live in and explore the beautiful city of Toronto,” he wrote in the article.

Police are asking anyone who was in the area between 8 p.m. and 11 p.m. or who may have video footage to contact police at 416-808-7400 or reach out to Crime Stoppers anonymously.