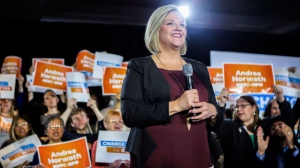 A new poll suggests the outcome of Ontario's election will come down to which leader, rather than which party, can win voters' confidence -- with Andrea Horwath the top challenger to Doug Ford.

An online poll conducted this month by the research firm Leger shows a quarter of participants believe the Progressive Conservative leader would make the best premier, while 20 per cent think it's the NDP leader and 12 per cent chose the Liberal leader and current premier, Kathleen Wynne.

At the same time, when asked whether Ford and Horwath have what it takes to lead the province, more people said Horwath did -- 35 per cent to Ford's 30.

And Horwath rated higher than both her rivals on characteristics such as competence, trustworthiness, and alignment with the core values of Ontario's population.

When it comes to the parties, however, the poll shows the Tories still in the lead with support from 43 per cent of participants.

The New Democrats and the Liberals are tied at 26 per cent.

"At this point, I think it's pretty much down to the leaders themselves, and certainly Mr. Ford in particular," said Christian Bourque, Leger's executive vice-president.

While a certain part of the population will vote Tory regardless, "all of these people that cannot say that yes, Mr. Ford has what it takes to be premier of Ontario, are the ones who may still switch," he said.

"So it's very much now about the leader and how statesman-like he will look over the course of the next few weeks and if he looks fit for the job. It think now it becomes a referendum on Doug Ford more than an election or not of the Conservatives."

The results suggest a shift in the left as well, he said.

When asked whether a Ford, Wynne or Horwath government would be disastrous for the province, only a third of those polled said yes for the NDP leader, compared with 44 per cent for Ford and 59 per cent for Wynne.

"The majority of people feel that four more years of Wynne Liberals would be a disaster but nobody seems to mind an NDP government," Bourque said.

"At first people were saying when this all started that 'oh my god, the NDP could split the vote,' but right now maybe it's the Liberals that might split the left-of-centre vote," he said.

More than 1,000 Ontario residents eligible to vote in the election participated in the survey, which was conducted from last Friday to Monday.