Human remains found in home renovation in The Annex: police 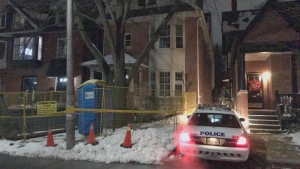 Human remains were found at a house being renovated in The Annex, Toronto police say.

Construction workers were excavating the ground under a property on Brunswick Avenue, south of Dupont Street when they found the bones, police said.

"We don't know if there was something suspicious involved," police said, adding that the property is approximately 140 years old.

Police said a test would be performed to determine how old the bones are.