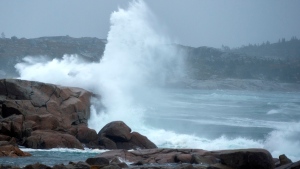 HALIFAX - Residents of Halifax and Nova Scotia's eastern shore were warned to stay away from the coastline as hurricane Teddy churned its way toward Atlantic Canada on Tuesday, pushing a storm surge ahead of its swirling winds.

The immense Category 2 hurricane - measuring about 1,000 kilometres across - was roughly 450 kilometres south of Nova Scotia by late afternoon. Travelling northward at 45 kilometres per hour, the storm's maximum sustained winds were clocked at 160 km/h, but it was expected to lose strength in Canadian waters.

“It's a very large and powerful storm,” said Bob Robichaud, meteorologist with the Canadian Hurricane Centre in Halifax.

“I know people are attracted to the shoreline and they love to watch the waves,” Porter said. “I want to caution folks: please stay back. If you get trapped out there, somebody has to come and try to rescue you, putting people in jeopardy unnecessarily.”

Robichaud said the storm surge along the eastern shore will come in two phases - as high tide approaches late Tuesday and again when daylight breaks on Wednesday and Teddy's centre moves over the province.

“Over the last number of years, we've lost a lot of people who have gone to the coast to watch those waves,” Robichaud said. “That's what we need to avoid with this particular storm.”

Later Tuesday, sheets of rain were flying sideways in Halifax, as wind gusts hit almost 50 kilometres per hour. Along the eastern shore, the wind was gusting at 85 km/h later in the afternoon at Beaver Island, near Ship Harbour.

Power outages were reported across mainland Nova Scotia, though they were sporadic. More than 3,000 homes and businesses were in the dark by 5 p.m., most of them in western Nova Scotia.

Localized flooding was expected as winds along the coast were forecast to reach 90 km/h Tuesday and more than 100 km/h on Wednesday morning.

Rainfall could exceed 50 millimetres across the province and in Prince Edward Island, with some areas on the left side of the storm getting as much as 100 millimetres over the next two days.

At the Sheet Harbour Discount convenience store, about 115 kilometres east of Halifax, manager Karen Malay said plenty of her customers were stocking up on essentials.

“They're buying extra chips and pop, cigarettes, flashlights and batteries,” Malay said. “And they're getting extra lottery tickets for the next couple of draws.”

As well, Malay said customers were telling her that one of the local service stations had run out of gasoline - which was confirmed by the station manager.

Meanwhile, it was quiet down the road at the Church Point Variety Store, where the manager said it was business as usual. “Everybody's used to it,” she said, declining to give her name. “They're just going with the flow.”

By noon, the store still had a full supply of potato chips, which is unusual because Nova Scotians are known for quickly stocking up on “storm chips” in advance of nasty weather.

Officials in Halifax suspended the city's harbour ferry service at 2:30 p.m. after issuing a plea for residents to secure patio furniture, flower pots, toys, garbage containers and any debris “that high winds could pick up.” Curbside garbage collection was also cancelled for Wednesday. Bus service was to be suspended at 7 p.m.

Weather warnings were in effect for virtually all of Atlantic Canada.

Though Teddy will likely transition to a post-tropical storm as it approaches the Maritimes, it is expected to produce damaging winds.

Paul Mason, executive director of Nova Scotia's Emergency Management Office, said comfort stations set up for those fleeing the storm will comply with public health rules regarding physical distancing. He said larger facilities would be used or more stations would be opened to handle the load.

The storm was expected to track over eastern Nova Scotia, the eastern half of Prince Edward Island and southwestern Newfoundland.

Robichaud said residents of southwestern Newfoundland should also watch for a storm surge on Wednesday, which could lead to localized flooding. He said Teddy does not pose much of a threat to the area in terms of wind or rain.

Marine Atlantic, the Crown corporation that operates the ferry service linking Nova Scotia with Newfoundland, cancelled all sailings across the Cabot Strait on Tuesday night and all day Wednesday.